On July 30th, millions of Ethiopians were challenged to plant trees across the country as a “reforestation campaign named “Green Legacy,” spearheaded by the country’s Prime Minister Abiy Ahmed.” Within the first six hours, of this twelve-hour initiative, it was recorded that 150 million trees were planted. Planting 200 million trees was the original goal for the day. However, the collective effort of the country surpassed that number within hours.

The efforts of the Ethiopian people resulted in a total of 353,633,660 tree seedlings planted across the country. Since, “less than 4% of Ethiopia’s land is forested, compared to around 30% at the end of the 19th century,” the agriculture industry was in desperate need of tree growth. Planting trees not only helps decrease “land degradation, soil erosion, deforestation, and recurrent droughts and flooding,” but aids with removing “two-thirds of all the planet-warming carbon that is in the atmosphere because of human activity.”

The Green Legacy initiative will continue into the next coming months, helping with the reforestation of Africa’s second most populated nation. They expect to plant 4 billion trees by October of this year. Reforestation in the U.S.

In the U.S., similar initiatives are taking place. The National Forests Foundation created a campaign to plant 50 million trees on National Forest lands that have been impacted by “natural disturbances such as wildfire, insects and disease outbreaks.”

The Nature Conservancy of North America also has “Plant a Billion Trees” initiative covering areas in the U.S. from Virginia to Minnesota. Their goal is to not only help plant more seedlings in heavily forested areas but to help the restoration process. This aids the survival of animals and the improvement of water sources.

Tree planting initiatives in the U.S. and around the world have a large impact on communities, wildlife, and climate change. Since, “eighty percent of Ethiopia’s population depends on agriculture as a livelihood”, planting tree seedlings significantly moves forward the efforts made for more prosperous communities. In the U.S., “Reforestation helps sustain and increase the carbon sequestration potential of our forests, mitigating the effects of global climate change.” These initiatives would not have been possible if it weren’t for the collective effort of millions of individuals and the conservation groups organizing them.

Interested in learning more about planting trees? Check out this article! What’s Wrong with My Roots? 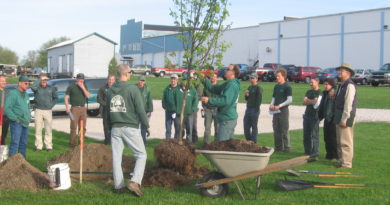