On your property, insects and microorganisms abound. This is a natural and beneficial state, since insects and microorganisms are key components in nutrient recycling, decomposition, plant succession, natural pest control, and wildlife habitat. But, like anything else, there are periodic outbreaks of destructive landscape pests. Technically, a landscape pest is any organism that:

There are several major groups of landscape pests:

Here are some dangerous pests to look for: ALB was first discovered in the United States in Brooklyn, New York in August 1996 and has been infesting trees across the continent ever since. Adult beetles feed on the leaves and twigs, but the larvae tunnel into the bark and feed on inner trunk tissues, which kills the tree.

Signs and symptoms include holes bored for exiting or egg laying, sawdust at the base of the trees or on their branches, and sap that sometimes drips from the tree. Most often, infested trees are identified by the presence of the beetle.

It is necessary to destroy the infested trees along with the eggs and larvae within them. To prevent further spread of the insect, quarantines are established to avoid transporting wood and branches from infested trees out of the area. Emerald ash borer (EAB) is an exotic beetle from Asia that feeds on ash tree foliage, usually in small, irregularly-shaped patches along the margins of leaves. Adult beetles are generally large and bright green.

EAB was discovered in July 2002 feeding on ash trees in southeastern Michigan and has been highly destructive to ash trees in its path.

It is difficult to detect emerald ash borer in newly infested trees. When a tree has been infested for at least one year, the D-shaped exit holes left by emerging adults will be present on the branches and the trunk

Treatments are recommended for homeowners in the quarantined area; it is not necessary to treat ash trees outside of this area. But treatments are needed periodically to protect trees from EAB. The Sirex woodwasp is a species of horntail, native to Europe, Asia, and northern Africa. Adults vary in length from 9 to 36 mm. This woodwasp is an invasive species in many parts of the world, including North America. Sirex woodwasp feeds on healthy pine trees and serves as a vector for a fungus that kills pine trees.

To learn more about utilizing IPM on your landscape, consult a professional tree care company or arborist in your area. Native to Asia, the hemlock woolly adelgid (HWA) is a small, aphidlike insect that threatens the health and sustainability of eastern hemlock and Carolina hemlock in the Eastern United States. The most obvious sign of a woody adelgid infestation is the white cottony clusters on the underside of tree needles. Young crawler nymphs hatch from eggs April to May.

They insert their piercing, sucking mouthpoints into the base of the needles. Damage is seen as grayish-green needles that accelerate needle drop and branch die back.

Early detection is key to slowing the spread of HWA in homeowner trees. A professional arborist can examine your trees for these pests and recommend potential treatments.

All images catalogued on www.bugwood.org. 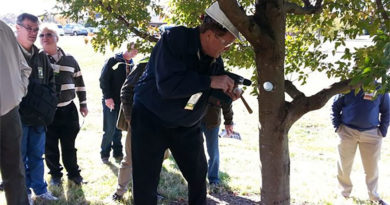